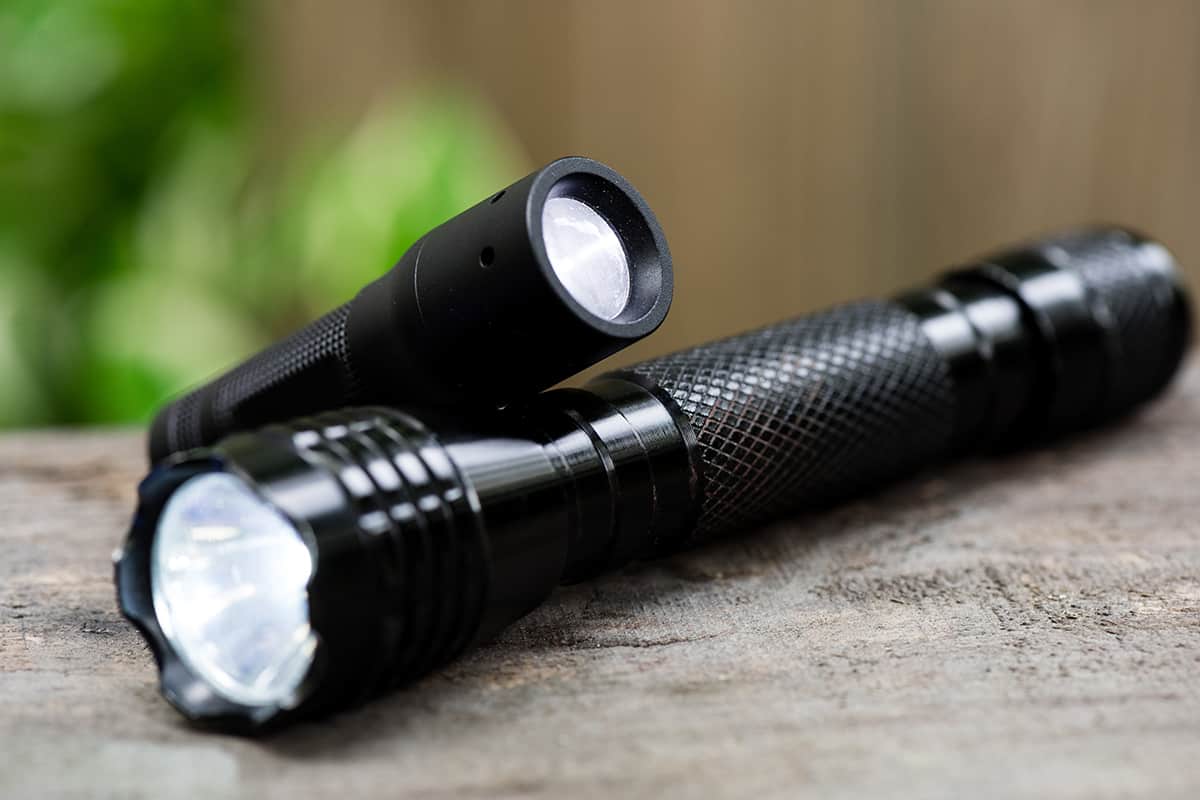 There is more to being an EDC flashlight owner than just turning it on when in need of proper lighting. Users that want to make the most out of their flashlights should be well conversant with the components of this handy piece of gear.

These components include the LED, the reflector, the lens, the bezel, the threads, the knurling, the batteries, the extra features of the tail, and much more. There is quite a lot to consider when talking about EDC flashlight components as covered in the following sections.

The head itself consists of the following units:

Each unit is very important and immensely contributes either to the functioning of the EDC flashlight or to its integrity.

LED – The Heart Of A Flashlight

LED (Light-emitted diode) is the most often used source of light in the majority of EDC flashlights these days. As it receives the electron current from the battery, the LED emits light.

There are many LED manufacturers, among which Cree and Nichia feature as the most popular. Their LEDs are most commonly used in EDC flashlights. Nichia specializes in LEDs with color rendering index (CRI), which is all about how well the light of the LED matches the natural light.

The LED itself has several parts. Going into details on each of them exceeds the purpose of this article, but there is one particular part that we must mention – “die”.

Die is a yellow square you can see if you look at the turned-off LED light. It is the die that emits light. The size of the die determines the kind of light beam produced.

In LEDs with larger dies (larger surface), the beam emitted will typically be wider and floodier. On the other hand, smaller dies produce a more intense (more focused) beam that has a longer reach.

Each LED light has some sort of special naming (typically a combination of letters and numbers). In the case of Cree LEDs, the format is (Model Number)-(Version) (Bin). Rare (aka “top”) bins LEDs are considered as the highest-performing and are normally found in top-notch flashlights.

Another thing to consider when discussing LEDs is the warmth of the light, often referred to as the “tint.” LEDs typically produce cool white light; however, the light emitted can also be neutral white or warm (yellow-ish).

Since the cool white light washes the colors, the warm light tends to be a better choice for outdoor use as it better differentiates green and brown colors. However, the neutral white is what the best CRI LEDs aim for.

When it comes to the actual light output, objects are measured and discussed in lumens, which we cover in detail in a separate article. More information on beam profiles is also provided in that same article.

Reflectors are an extremely important part of any flashlight. As the name suggests, they reflect the light in the desired direction and form a particular beam profile.

You can look at flashlight reflectors as lamps’ shades; they serve the same purpose, only more efficiently.

Reflectors come in various shapes, sizes, and textures, yet when it comes to EDC flashlights, they can usually be divided into three main types:

Lenses are the small plastic or glass “windows” at the top, which protect the light bulb. In the case of basic EDC flashlights, the lenses do not affect the light beam much. Yet, when we look at the specialized EDC light, the lenses play a major role in optics.

Lenses can be fixed or adjustable. The latter enables users to focus or defocus the beam.

Moreover, lenses can be frosted, spherical, or other kinds that further affect the output beam.

Since optics require precision, it is best to focus on fixed lenses in the case of budget EDC flashlights. On the other hand, in the case of high-end models, the lenses can contribute greatly to the user experience. Quality lenses add a variety of use cases that can serve in all kinds of situations.

A bezel can be a simple extension of the head, in which case it is obviously made out of the same material as the rest of the flashlight or it can come in the form of a protective insert. The latter is particularly common for heavy-duty tactical EDC flashlights, where bezels are typically made out of tough and durable stainless steel.

Moreover, bezels can be “scalloped” or “crenelated,” which means that they have protrusions. In most cases, this feature is added to tactical EDC flashlights to offer additional self-defense properties.

In addition,  with the scalloped bezels, if one forgets to turn off the light when placed on a flat surface, some dimed light will be coming through letting the user know that the light is still on. Of course, this may also be used to intentionally create some soft atmosphere light.

There is a particular part of the body, called the “threads,” or screw threads to be exact. These are the parts that connect the flashlights’ heads and tails to the main body. The threads play an even more significant role in the case of flashlights that involve twisting or tightening of the head.

Knurling is a manufacturing process responsible for adding various types of lines, grooves, and patterns to the surface of the flashlights’ body.

Knurling pattern is very important, both from the visual point of view and the grip. The esthetics may be of lower interest for most users; however, proper grip is not to be overlooked, especially if a flashlight has a twisty activation mechanism or if you end up using it with sweaty palms.

Users that want the best grip, should be on the lookout for “aggressive knurling.”

There is quite a lot to cover when it comes to battery options, so we have a separate article, in which we dive deeper into the EDC flashlight power and batteries.

The EDC flashlight’s rear or tail is the last part. It might seem like the least important one, but no flashlight would be complete without it.

Two parts of the tail play key roles; the rear bezel and the switch (where applicable). Aside from these two parts, there are also pocket clips, lanyard holes, tail-standing, magnet, and some other features located in this part of EDC flashlights.

The rear click switch is the press-button switch located at the tail of the EDC flashlight. This switch is still one of the most commonly used options. Further, it comes in two versions – a forward clicky and a reverse clicky.

If an EDC flashlight incorporates other types of switches, namely twist, and side switch, that means that there is no switch at the end of the tail.

In the case of the rear clicky switch, many EDC flashlights incorporate an extended rear bezel, which serves as additional protection in case of drops and also prevents accidental turning on of the light when not needed.

Moreover, some EDC flashlights incorporate a magnetic material (more common in non-rear-clicky switch types) in the rear bezel. This means that the tail standing option may also be used in a horizontal or even an upside-down manner wherever a metal surface is available.

The EDC flashlight’s tail determines the carry options in most cases. Practical features such as pocket clips and lanyards are commonly located at the rear bezel.

We will cover all EDC flashlight carry options in a separate article in detail.