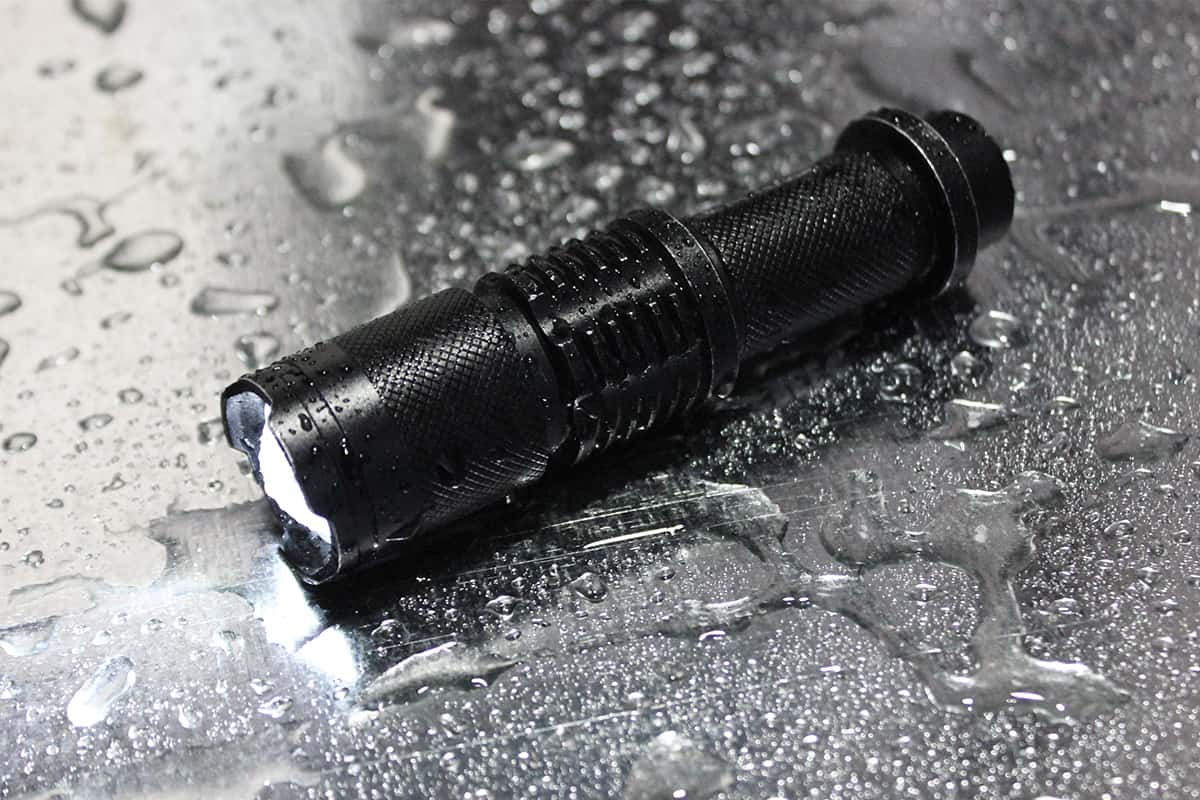 Ingress protection in flashlights is often considered as an additional feature (not a must-have). Yet there are fairly many EDC flashlight users that tend to get exposed to tough situations quite often.

Flashlights with ingress protection and advanced toughness are an advantage for outdoorsy individuals looking to take on more extreme adventures. There are also professionals, such as firemen, coast guards, military personnel, and other ‘action’ duties that require such flashlights.

We take a closer look at the four most common environmental dangers, which could require a flashlight with some level of ingress protection, including water, dust, fire, drops, and time.

For users that plan to be exposed to some heavy rain or even jump into the water with their EDC gear, water resistance plays a key role.

It is important to understand the difference between water-resistant and waterproof models.

Water-resistant flashlights will work after small splashes or high humidity but will not survive in water submersion.

On the other hand, a waterproof EDC flashlight can actually be submerged in water and continue to work. In most cases, it may also be turned on and off under the water (not in all).

When it comes to waterproof levels, there are universal standards set in place (IP rating/code). IP ratings come in the form of ‘IP’ followed by two digits; the first one representing dustproof level and the second one the waterproofness.

IPX followed by a digit is also quite common, which means that a dust-proof test hasn’t been performed. Though, if the waterproof level is very high, this means that dust will also not be able to enter the flashlight.

Flashlights with advanced water resistance should have IPX7 or IPX8:

Any corrosion-resistant material can be used to produce waterproof flashlights. The most important role is played by the seals, which must be of the highest quality. In some cases, EDC flashlights may be rubberized to achieve a higher level of waterproofness.

Note: Waterproof flashlights with the highest IP rating are not to be mistaken for professional diving flashlights, which are designed to withstand higher pressures and thus be used at greater depths.

Since dust and water resistance go hand in hand, users do not need to pay extra attention to these features in case of flashlights with high IP standards, namely IPX7 or higher.

However, if the level of water resistance is not the highest, the dust-proof test will also be performed. The highest rate for dust-proof is 6, which means that users should focus on flashlights with IP6 (waterproof score) to ensure their flashlight survives the sandy environment.

Another great feature of the waterproof-dustproof combo is that one can simply wash off the dust or sand using running water. This obviously enables users to keep their flashlights clean with ease.

Fireproof properties are less common than waterproof ones but some users will find this feature very useful. And where there is demand there is also a solution.

As such, there are various types and models of EDC flashlights available with fireproof capabilities. Fireproof tests have more wiggling room, which means that users need to pay extra attention to the exact characteristics of that feature.

Since metals can survive rather high temperatures, it’s the lens, battery heat isolation, and the switch mechanism that must be specially designed to sustain fire. Obviously, ‘fireproofness’ also comes with a predetermined time frame.

This feature might not be essential for average Joes, but it’s a must-have for firefighters.

The last thing anyone wants is their flashlight failing as a result of dropping. As such, all high-quality and durable flashlights go through extensive drop and crush testing.

This test may be standardized (mainly to military standards or ANSI standards) or completely commercial. One can point out a standardized test by noticing specific numbers given, but commercial tests tend to promise vague results.

Some ultra-tough flashlights can survive being run over by a car and drops as high as 10 feet or more.

All of the above “-proof” features significantly improve the overall durability of a flashlight, though resistance to shocks and drops plays the most important role for an average user.

Moreover, the material from which the flashlight is made and the quality of production play an ultra-important role as well. For instance, aluminum is way less resistant to wear and tear than titanium, brass, nickel, or stainless steel.

If you choose the type of ingress protection features accordingly, an EDC flashlight can serve you for years to come. Proper care, such as keeping the flashlight clean, checking the batteries, and storing it properly prolongs the lifespan even further.