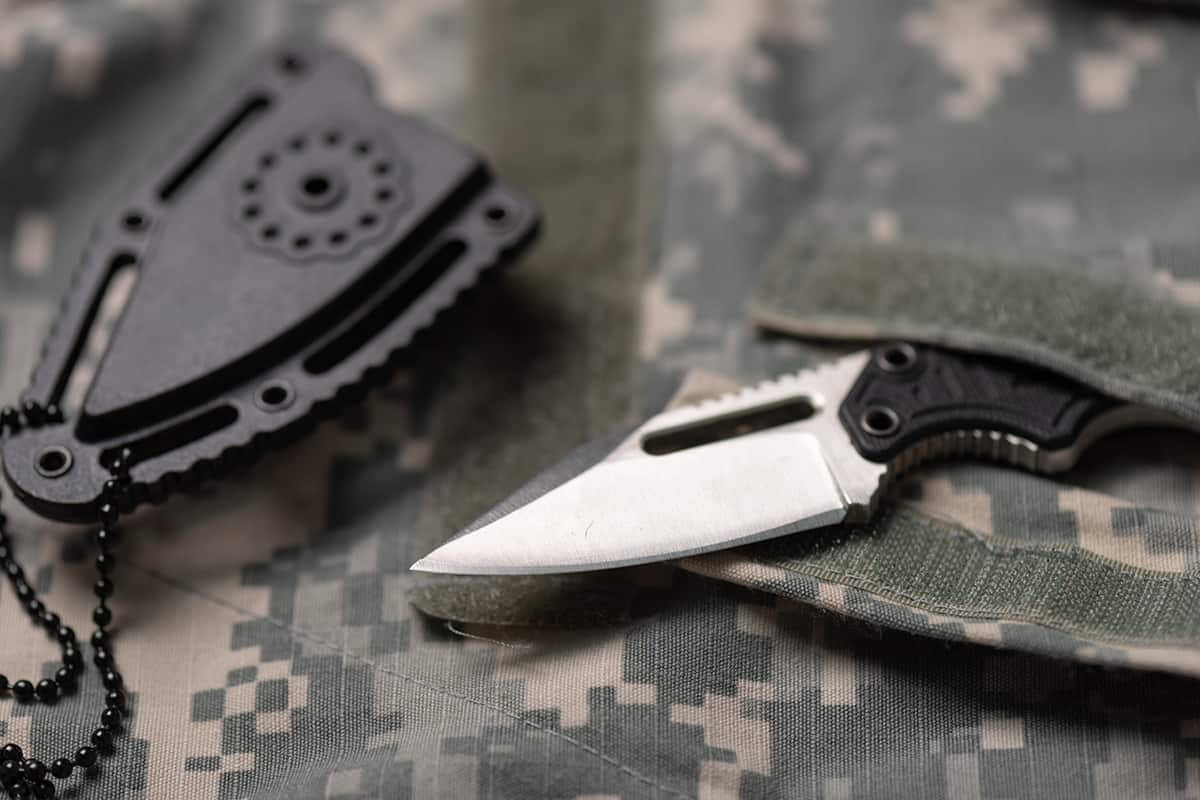 One distinct advantage of EDC knives is having them at hand at all times. The mode of carry determines how easily and quickly it can be put into use.

EDC knife users must consider certain aspects when determining the most optimal carry method for their situation.

Note that the type of knife greatly impacts the given carry options. This means that users need to consider this aspect well in advance.

There are countless types of EDC knives users ranging from the average Joes to the trained professionals carrying their piece on duty. In between, we have fishermen, hunters, field workers, sailors, campers, and many others. With such a wide range of needs, there are obviously multiple ways of carrying an EDC knife.

Average Joes mainly carry their EDC knife either for protection or to have a sharp tool at hand in case a rope or some other items need to be cut. Those carrying a knife for self-defense purposes need to have an option to deploy it fast. Having it stored in a bag is not a good option.

On the other hand, those carrying a knife as a tool, quick deployment is usually not needed. This means that a knife can easily be stored in a bag or a backpack.

Similar to users with self-defense intent, military and police personnel also need to be able to put the knife into use as quickly as possible. As such, having an EDC knife behind the belt or chest harness is often their preference.

EDC knives can be either fixed-blade models or folding knives. Both have different carry options, with folding knives offering a much wider range. One can carry an average folding knife in basically any pocket or simply throw it in a bag.

To the contrary, a fixed-blade knife will require a special sheath. And while covered with a sheath it will mostly likely be carried in a bag as it may not fit an average pocket.

Users that prefer fixed-blade EDC options will in most cases be limited to belt carry options, which is still a leading carry method for self-defense and combat purposes. In these kinds of situations, fixed-blade knives may be preferred as there is no wasting time with deployment. One simply pulls the knife out of the pouch when needed, which can be done in less than a second.

There are EDC folding knives with special open mechanisms that also offer very fast deployment; however, they are still hardly a match to fixed-blade knives.

For users that want to make their EDC knives as concealed as possible, folding knives are typically a better choice as they fit in pockets without the need for extra pouches, which would add to the bulkiness.

Below is a list of the most important aspects to be considered when choosing between the folding or fixed-blade knives.

Note: Since there are countless knife options and models, there are exceptions to these rules. Though, they serve great as a general guideline.

There are pros and cons to fixed-blade knives. One of the advantages is that when combined with the right kind of holster, they offer quite a wide selection of carrying options all of which offer very fast deployment. Of course, users need to ensure that the holster is of high quality – durability, smooth inserting and withdrawal and at the same time the ability to hold the knife in place.

Users must also keep in mind that not all fixed-blade knives can be carried in all methods. This means that a user that has a particular carry method in mind should select a knife that suits that carry method.

All leading manufacturers of EDC knives also offer high-quality sheaths. This includes CRKT, Gerber, Kershaw, and many other reputable brands.

In the following paragraphs, some of the most popular ways to carry a fixed-blade knife are presented.

Drop leg, also known as ‘dangle,’ is a popular carry method for larger fixed-blade knives. Drop leg configuration allows for the pouch to dangle freely. Many easy-going users really like that, while those involved in faster movements would rather go with some other options that fix a blade in a tighter position.

This method offers a high level of convenience and ease of deployment but is not concealed at all.

The pocket static line carry option enables users to conceal their fixed-blade knives as much as possible. It is suitable for small knives. This carry method is highly secure, though it depends on the type of pocket-whether it is comfortable and whether it limits users’ movement. A pocket static line is typically hooked to a belt, while its tip goes down the pocket. Of course, this option works also with pants without pockets, in which case it is less concealed.

For outdoorsy adventures where users have a backpack on them, the clip-on-bag carry option is a very comfortable choice. It completely eliminates any potential discomfort that may come with belt or pocket carry options.

IWB stands for Inside Waistband. It is a great option for concealed carry needs. It is not suitable for large knives but with small ones that are also slim it can work really well. Some additional caution is required with this carry option; it is best to go with a pouch that enables users to secure the knife in place and thus prevent it from accidentally slipping through users’ waistband and falling down their pants leg.

Outside Waistband tip-down carry method is one of the most commonly used EDC knife carry options. It works for both small and large knives. It offers high convenience as the knife can be positioned anywhere around the waistband, though having it on either hip is the most popular choice. This carry method also offers a very quick release. Users wanting to conceal their knives are better off looking for other alternatives, though smaller models can easily be covered with a shirt not tucked in.

Outside waistband tip-up is less common than the previous method but still oftenly used. Its main advantage is that it enables quick drawdown out of the sheath, which is more convenient in some situations and thus preferred by some users. Pouches suited for this carry option need to be extremely tight to prevent knives from falling out accidentally.

The neck carry method can be very practical for users that plan on wearing shorts or other types of pants that do not offer proper support to carry a knife. This carry option requires a special kind of pouch, which needs to be able to hold the knife in a tip-up position and also pack a string or chain that enables users to hang it around the neck. If placed under the shirt it is also highly concealed.

Scout is great for concealed carry as it is typically located at the back (side and front carry is also an option). It holds the knife in a horizontal position for fast deployment. This horizontal carry method is also comfortable as there is no tip nor handle poking the user below the belt. Though, it can cause slight discomfort when sitting as it creates additional pressure on the lower back.

Experts agree that the cant carry option offers one of the best combinations of concealed carry and fast withdrawal. Cant is very similar to the scout carry option, but instead of being in a horizontal position, it comes with a slight tilt upward. This tilt offers additional security as gravity forces the knife to stay in the sheath. Furthermore, it is also this angle that enables even quicker and more seamless withdrawal. Certain cant sheaths can also be worn on the inside.

On the downside, cant typically means that the knife is carried on the back, which can cause slight discomfort when seated.

Either a special kind of holster or a belt clip may be used for this carry method. It is common among soldiers and Special Forces for a backup concealed weapon. It may cause some additional discomfort, thus it requires some getting used to.

Note: Many folding knives come with special pouches(may be purchased separately), which enables many of the above carry options to be applied. However, it usually does make a lot of sense to carry a folding knife any other way than in a pocket or behind the belt.

Folding EDC knives are typically equipped with pocket clips or a lanyard or even both. These two features provide users with practical ways to carry a folding knife without the need for a holster.

With the use of a pocket clip, folding knife users can easily carry their sharp buddy tucked inside or outside of any of their pockets or belt. Pocket clips are typically made of stainless steel. They can be fixed or detachable.

In the case of the latter, many quality folding knives offer users clip on two or even more positions on the knife. This is typically done by unscrewing two small screws and then screwing them back in another position. Of course, users can also decide to remove the clip altogether.

Repositioning of the pocket clip enables users to carry the knife as it best suits their needs. This means that the knife can be worn on any side of the body, in a tip-up or tip-down manner, and either on the inside or outside of the pocket.

On the other hand, lanyards are particularly practical for attaching knives to bags or backpacks. They may also be used to hang a knife somewhere when not in use. Some users also tend to use lanyards as additional security to hang the knife around their wrists.

Some knives do not include lanyards but have a lanyard hole. This enables users to pick any type of material and use it for lanyards if they want to benefit from this feature.

Thanks to the features explained above, most folding knives do not require holsters. However, users that are exposed to rough environmental situations may use holsters to offer their knives some protection.

Holsters typically come with clips or hooks that allow users to carry them around belts or fixed in pockets.

However, users expecting to deploy their folding knives as fast as possible, especially in case of self-defense situations should absolutely avoid holsters. Getting a folding knife out of the pouch takes precious seconds, which could be crucial in life-or-death situations.

How well does a knife stay in a pocket? If the knife falls out of the pocket easily, it has poor pocket retention. On the contrary, if it is able to stay inside the pocket even during turbulent activities, such as jumping and running, then it has good pocket retention.

Quality pocket clips ensure good pocket retention, but things like extra-long handles can cause some issues in that aspect. Folding EDC knives with handles longer than 4 inches tend to be problematic. As users bend or flex their legs, the long-handled knives will be pushed out of the pocket more easily.

It is quite obvious that any metal object has the potential to damage pockets. When using proper pocket clips, which are meant to be very tight, the hazard of damaging the fabric is highly increased. Further, users need to consider a knife’s grip. The rougher the knife’s handle, the more friction it will cause. This further increases the risk of damaging the pocket.

Wearing high-quality pants is essential. Quality tactical pants will not be damaged easily. On the other hand, clipping a pocket knife with a tight clip and an ultra-rough grip to regular pants will tear the pocket sooner or later.