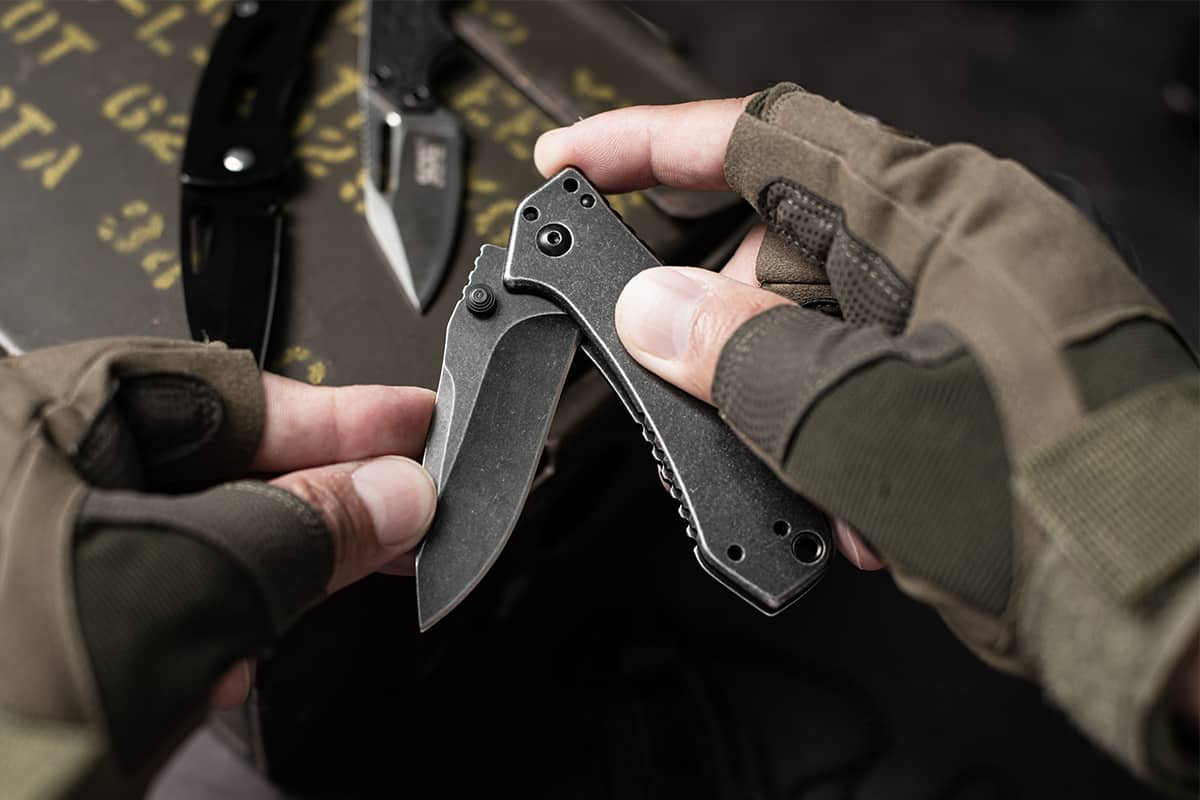 Unlike fixed-blade knives, which offer very straightforward deployment (users only need to take the knife out of the holster) things are slightly complex with the folding knives.

The exact method or mechanism to open a knife varies among brands and models. Users looking for the best experience with their folding knives should definitely get to know the EDC knife deployment mechanisms better as discussed in this article.

The majority of folding knives come with the manual opening method but some models may have the automated or semi-automated opening system.

The basic concept in most folding knives follows the simple principle of applying torque. The blade and the handle are attached together in the joint, which in return enables the opening and closing of the blade.

Further, the opening method also depends on whether or not the knife packs a locking mechanism. If it does, this can assist with the opening, which is why some knives are referred to as assisted opening knives.

On rare occasions, the blade can also be coming out of the handle vertically. This option can be seen in a specific type of automated knives.

Flippers are the most popular folding knives. Their main advantage is that normally they enable one-handed deployment.

Flipper knives incorporate a bar or a tab, which needs to be flicked in order to open the blade. This is typically done with the index finger.

With that said, it is quite obvious that this mechanism is highly suitable for self-defense pocket knives as it is in self-defense scenarios that every millisecond counts.

There are many reputable brands that produce flippers, including Benchmade, Zero Tolerance, Emerson Knives, and many others.

The wave deployment mechanism was developed by Ernest Emerson and is thus used with some Emerson knives.

This extremely well-designed method enables users to pull the knife out of the pocket and open it at the same time. This makes it the fastest deployment mechanism. Even automated options can’t compete with the wave method.

As such, the wave method is recognized as the best option for self-defense knives.

Note that this mechanism is often confused with automatic ones, which can get users into trouble with the law. With that in mind, users need to check their local knife regulations and consider them when selecting their new EDC knife.

The thumb stud is another broadly used opening assisting option. It is basically a small lug (cylindric bolt) located near the pivot at the base of the blade’s spine. There are single thumb studs, though dual ones are much more common these days.

The thumb studs provide additional torque and thus make the opening of the blade easier.

The thumb stud option can be built-in to the blade or it can often be purchased separately and attached to the blade. This deployment method is often combined with the nail nick option.

Compared to the wave mechanism or flipper, this one is usually a bit more difficult to use and it offers slower deployment. Moreover, it cannot always be deployed single-handedly.

Just like dual thumb studs, this method allows users to use thumbs or index fingers to deploy the blade.

The spyder hole opening mechanism is traditional for the Spyderco brand; however, it has also been adopted by some other brands. As the name suggests, this is nothing but a hole in the back portion of the blade. This hole enables users to place in the tip of the thumb/finger and use it as a lever to deploy the blade.

This is a very basic opening option and thus offers limited deployment speed. Further, it may also require two hands to get the blade open for new users but experienced users with strong fingers can normally do it single-handedly.

The nail nick is one of the oldest opening assisting mechanisms. It is so simple that calling it ‘mechanism’ seems rather absurd. It depends on the level of friction in the joint, but in some cases, the nail nick can be rather unpractical and unpleasant. People often break their nails using this method.

This old-fashioned opening method is a bit slow and normally requires two hands. Thus, it is not suitable for self-defense knives.

With that in mind, it is not surprising that modern EDC knives usually have other deployment mechanisms, and nail nicks more often than not come only as an additional option.

The Autos are EDC knives that enable users to deploy the blade with a push of the button or switch. Autos can swing open just like most manual or manual-assisted EDC knives or they can push out the blade on top. The latter are known as the OTF (Out the Front) automated knives. One of the most known OTFs brands is Microtech.

When it comes to switch blades, users need to pay extra attention to the local laws. There are still many states where these types of EDC knives are illegal.