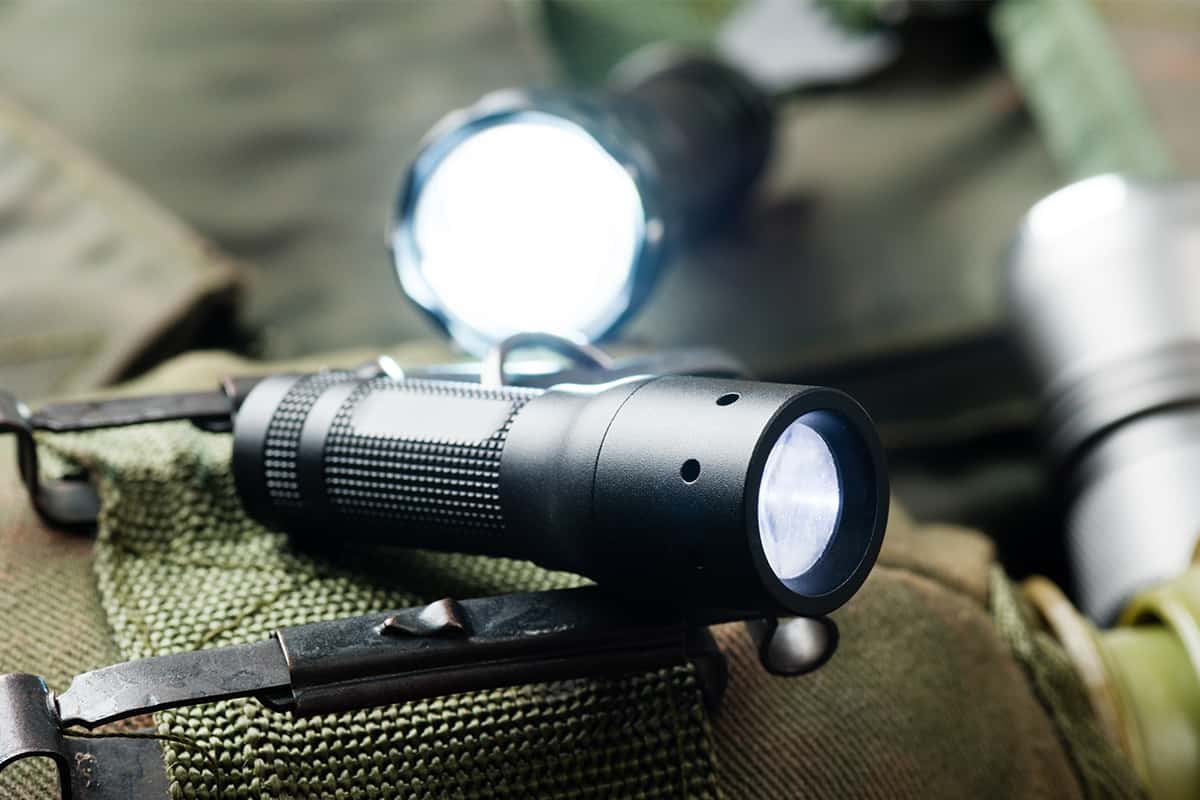 Note: In rare cases, a specific flashlight may appear in multiple categories, so the types of EDC flashlights do not necessarily have clear borders.

Tactical lights are the most common type of EDC flashlights. As the name suggests, they are built to survive the tough environment. They are typically on a larger end of EDC flashlight size span, and thus on a heavier side as well.

Tactical lights are normally characterized by rather powerful light output and may, as such, be used to blind a potential attacker. This is a great feature that potentially gives users enough time to escape to safety and avoid unnecessary confrontation.

In case the confrontational situations escalate, tactical lights normally help as well. More often than not, they pack bezels with protrusions, which can cause some serious damage in case of combat.

Needless to say, tactical flashlights are normally built to last. However, due to their tendency of being on a larger side, they are most often made out of aluminum, which may not be the toughest material, but offers the best strength-lightweight balance.

Tactical flashlights are a great choice for users that have the option to carry slightly larger EDC flashlights. It is a common choice for on-duty use.

This type of flashlight is also a go-to choice for those looking for a self-defense item that is not necessarily characterized as a weapon.

Penlights are the second type of EDC flashlight that is commonly used as these kinds of lights resemble pens’ shape, which makes them ultra-portable.

The light output of penlights is typically much lower than those produced by their tactical counterparts. Still, a quality penlight may easily deliver more than 100 lumens, which is quite decent.

Penlights can be made out of various materials; plastic may be a common choice for budget models, but the quality ones are made of aluminum or even other tougher metals.

This type of flashlight is usually used by various technicians, plumbers, and engineers. It is primarily intended for indoor use, though there are weather-resistant models available as well.

As the name suggests, they obviously come with a keychain attachment option, which may be used to attach them to backpack zippers, belt loops, or other practical carry options.

Keychain lights tend to be the most practical, especially when used as an actual keychain. Since most users already carry their keys with them all the time, adding a small flashlight to the bundle comes rather naturally.

Of course, these types of EDC flashlights are very small and normally in a rather lightweight style. And since keys tend to be thrown around, they do commonly incorporate heavy-duty metals that tend to add slightly to the overall weight.

In general, keychain lights have a lower lumens output and may oftentimes be used as a supplement EDC light. However, there are more ultra-powerful keychain EDC lights available on the market that can easily assume the role of the main EDC light.

Since the main advantage of this type of EDC flashlights is the fact that they are always at hand, they offer an ultra-wide range of use cases.

Models with lower lumens output serve best for indoor use, while the ones with more power can offer a great outdoor solution as well.

As mentioned earlier, not all flashlights can be categorized in the above-explained types. In some rare cases, an EDC flashlight may not have any of the specific features of either of the main three types. Those are often marked as special or uncategorized flashlights.

So, the flashlight could be ultra-small and not particularly powerful but not incorporate a keychain hook. Or the light may be very powerful and similar in size to a tactical flashlight but have no self-defense features and no weather resistance. Those are classic examples of uncategorized flashlights.

On the other hand, the light may have special features and thus be categorized based on them. Those are special EDC flashlights. For instance, they could include tinted lights, custom flashlights, ‘portable suns,’ and magnetic selector ring lights.

Keep in mind that any of the main three flashlight types, namely tactical lights, penlights, and keychain lights can incorporate one or more of the special features mentioned above.