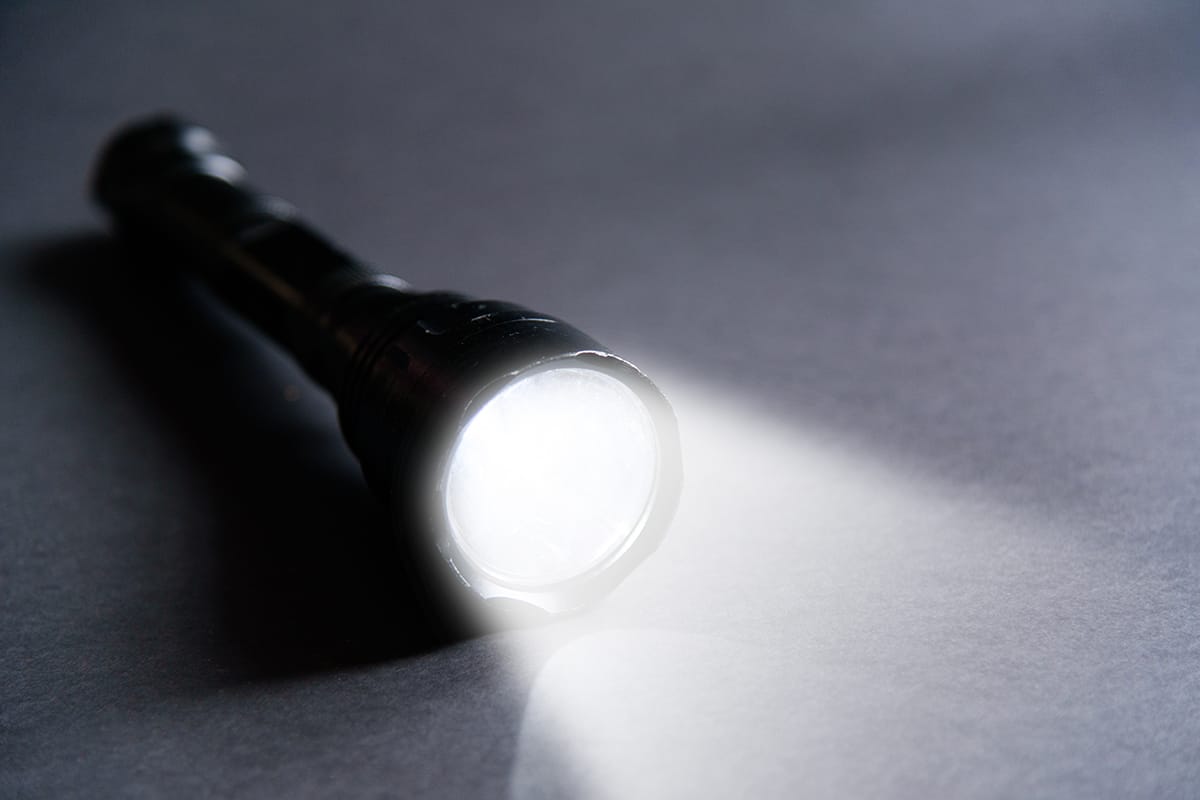 Although each EDC flashlight incorporates many aspects and features, its core purpose is its ability to provide light – its output.

How much light should the flashlight emit? What area should it be able to light up? How far does a user need the light beam to reach? Let’s dive into it.

Lumens are a measure of the total amount of visible light emitted by a light source. When the lumen rating is higher, the lamp emits more light and thus appears brighter.

In the past (with traditional light bulbs) the light power was solely denoted in Watts. However, with the rise of LED lights, lumens became the standard unit since Watts do not link to the light output correctly. Watts just tell how much power the light consumes.

With the LED lights, more light can be emitted with much lower power consumption. Comparing a Halogen bulb and a LED lamp, the latter can output the same amount of light at 6.5W as the former at 50W, which is a huge difference in power.

As technology progresses, larger lumen outputs with lower power consumption are expected. This lamp evolution makes Watts no longer relevant for light output. Though, users can still find the LED-conventional output listed on most of the packaging.

Lumens are denoted by “lm” and labeled on the packaging.

Since many users are still not completely used to lumens, it is necessary to learn the old Watts vs. lumens comparison. Below is a table containing some standard values.

Many manufacturers list the maximum potential output of a LED instead of the actual values that are realistic. If possible, users should look for the models that list the actual light emitted out the front (OTF) of the flashlight, which represents the actual flashlight performance.

Generally, it is best to look for the lumen values based on the American National Standards Institute (ANSI) to get more accurate numbers.

How Many Lumens Is enough?

Since there are many types of EDC flashlights and many users with varying use cases, there is no one-fits-all solution.

Flashlights come in a wide range of output power – from 10s to 1000s of lumens.

The size of the lamp is often correlated with its lumens output; however, there are exceptions where a smaller flashlight can deliver more lumens than a larger one.

As a rule of thumb, users may use the following guidelines to determine what lumens output they should aim for:

An EDC flashlight can have a fixed lumens output or users can adjust the output according to their needs.

Fixed output offers maximum simplicity of operation and typically a higher level of ruggedness as it doesn’t incorporate a regulator, which can be an additional point of failure in case of external forces. Though, if built properly, a flashlight with adjustable output can be very practical.

Users operating in a wide range of environments and situations that require different light output levels can benefit greatly from adjustable EDC flashlights.

Users should also be familiarized with Quantum Tunneling Technology, a technology that enables continuous switching.

The beam is the main purpose of any flashlight. It is the light that comes out and lights the way. Every beam has its profile, which is best seen when the light is shined against a white wall.

The majority of modern EDC flashlights have flat lenses and the kind of reflectors that produce a beam that is concentrated at the center. That part of the beam is called the “hotspot.” The rest of the beam (the light around the hotspot) is called the “spill.” The transitional portion between the hotspot and the spill is often referred to as the “corona.”

The beam throw is nothing but the beam’s reach. The reach of a flashlight’s beam is determined by the distance between the flashlight and the object over which the beam still effectively illuminates the latter.

Flashlights with a long reach are often known as “throwy” flashlights. They tend to have tighter hotspots in higher beam intensity. That type of beam is achieved thanks to deeper and larger reflectors.

Users in need of EDC flashlights that will be able to light up distant objects should look for models with that sort of reflectors.

Lux and candelas are specs that measure light on a given area and provide users with information about how intense and far-reaching the beam is.

The beam flood refers to the beam’s spread. It tells you what area the flashlight is capable of illuminating. Generally speaking, the two characteristics-the beam’s flood, and the beam’s throw are mutually exclusive. The more “floody” the beam, the less throwy it is and vice versa.

Users planning to work with an up-close surrounding and illuminate as much of it as possible should look for floody flashlights.

These types of flashlights normally have shallow reflectors or none at all. Moreover, they tend to pack larger die LEDs.